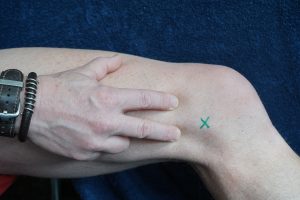 Summary
Regularly, the doctor and the physical therapist are confronted with patients who indicate pain on the lateral epicondyle of the femur. Usually it is about runners. The incidence of the runners knee: the iliotibial friction syndrome is estimated at 6.4% per 1,000 soldiers who have received basic training. The patients are initially troubled because of the sharp stabbing pain and, when they are reassured because of the benign nature of the condition, amazed and sometimes desperate because of the stubborn character of the complaint that prevents sports. Often another sport has to be chosen as an alternative until the complaints go into recurrence. In this presentation the anatomy is highlighted, as well as the presumed causes of the complaints. In addition, attention is paid to the role that ultrasound can play in the confirmation of diagnosis and differential diagnosis.